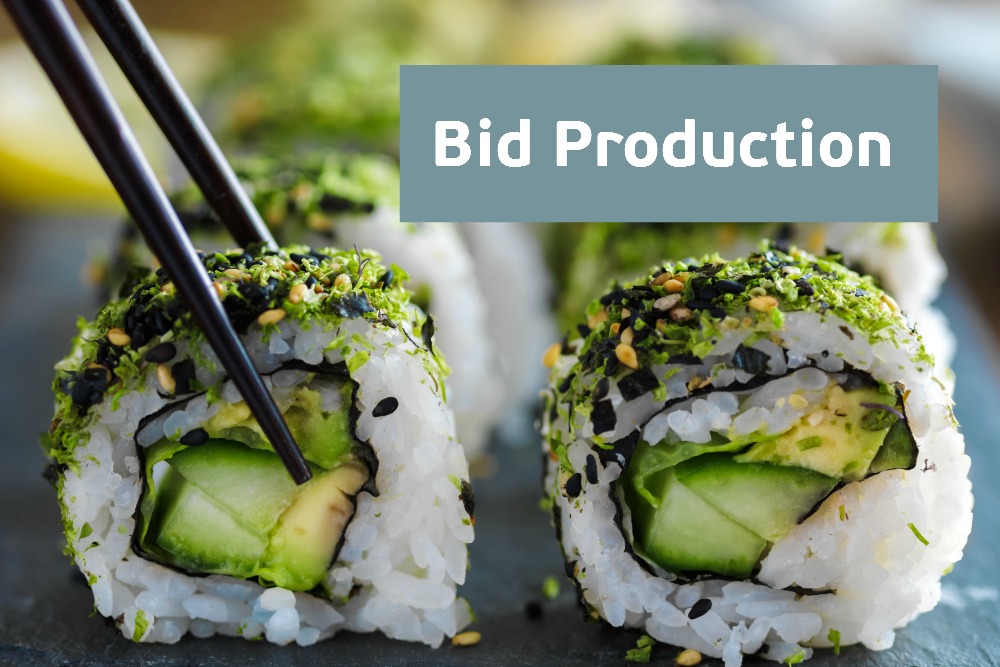 Is your Bid Production process neat and aligned like this sushi, with your bid perfectly finished and ready to go? In the final stages of a large bid, although we might fantasise about the component parts all turning up complete and on time, the documentation team merely doing final checks to bring everything together, the finance team simply carrying out one last sense check on the numbers, PMO oversight happening as if  bid production were an orchestra – it isn’t usually like this, is it.

Unconsciously it may be that Bid Team members don’t really want it to happen this way either, as it could take away the adrenalin, buzz and even the kudos of working together through the night before submission.

So as the PMO leader, what is the most positive and proactive contribution you can make to the overall bid leadership and bid success? And what in particular can you do to support the final stages?

As PMO leader you are responsible for documentation, guidance and metrics on the practice of project management and execution within the bid team. You sometimes have competing requirements to be supportive, controlling and directive at the same time. I have seen you demonstrate key leadership skills and qualities in many and various ways:

It can still be tough though, can’t it? Frustrating and slow getting people on side, influencing them to change their behaviour and to adhere to standards right from the beginning. The benefits are clear though – you reduce the risk of a frazzled bid production team including a significant error in the final run.

I know you usually think ahead and are on the front foot. However, if becoming even more skilled at positively influencing timely bid production is important to you, you could invest in a tailored coaching session or masterclass for your team. Why not book an appointment here.

Here is what one client said:

“As PMO Workstream Lead for the Northern Rail Franchise bid, I was one of the team Gill regularly coached. Her coaching was definitely the most effective coaching I have participated in. Gill understood the pressures we were under as a team and was very adaptable with her approach. This was very powerful for me personally but also resulted in a more cohesive team.”

Gill How has over twenty years’ experience of working with bid, sales and other professionals to develop their leadership and interpersonal capability to achieve the level of results and effectiveness they desire. If you would like to meet for a cup of coffee to explore how she can help the achievement of your goals, contact her here.

When two guides are better than one
Lessons from a small country, post-Brexit